This is my good friend, Miles. 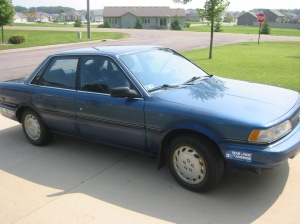 He’s got Japanese roots, but was actually born in Georgetown, KY. He was named after Miles Davis, one of the greatest jazz musicians of all time.

Miles has visited each coast, been to Canada several times, and almost been to Mexico. He’s traveled nearly the equivalent of a one-way trip to the Moon. He’s gotten a few bumps and bruises along the way, suffered a few minor internal ailments, but otherwise has aged pretty darn gracefully for being nearly 23 years old.

He’s been a good friend for all the right reasons: faithful, reliable, and dependable. He also gets along great with my wife since he spent a lot of time with her the first half of his life, and they’re still on good terms with each other. He can keep a secret better than anyone I’ve known (when we’re out together with the windows closed and I rant about bad drivers or outrageous/stupid/ignorant things I hear on the radio). Based on a few close calls we’ve had, he’s always been willing to put himself in harm’s way to protect me.

Sometime in the next year or so, Miles will retire, hopefully to a good home that will take care of him in his last years. I don’t want to be the one to pull his spark plugs, so I’d like to either sell him to someone who will use him gently for his remaining time, or donate him to the radio station he learned to love after all those years, Minnesota Public Radio. His favorite show was Leigh Kamman’s The Jazz Image. Yeah, late Saturday night drives home while listening to all those great jazz tunes were some damn good times together.

When he slowly rolls to his final stop, I hope he’ll be c(a)remated rather than tossed into an open graveyard with hundreds of other rusted old heaps. Better to recycle his useful elements ASAP than have him slowly decay and pollute the ground water.

As his final day approaches, I find myself feeling sad and melancholy. I took him for granted for the first twenty years or so. I always assumed he be there, start on command, get me where I wanted to go fast and efficiently. I would let him go weeks, even months without a shower; throw trash in his backseat; let dust, dirt, mud, and a multitude of food crumbs accumulate in his cracks and crevices; and delay taking him in for regular checkups. At least I made sure he got his annual or biannual oil transfusion. I wasn’t nearly as good a friend to him than he was to me.

Yet Miles never complained, always had a smile on his grille, always purred like a tiger when I started him up each day. But only rarely would I pat him on the roof and say, “Nice job, Miles. That was a bad storm you just got us through,” or “Thanks for a smooth ride.” Even though I ignored him a lot, I was grateful for every safe trip we ever took, even the shortest trips down to the local convenience store for gas, or bananas and milk, or a late-evening summer ice cream run.

So thanks Miles. For everything: Every new mile. Every new road. Every new town. Every new vista. And all the old ones, too.  I’ll miss you when you’re gone. Ashes to ashes, rust to rust.

My question: Why do we anthropomorphize and befriend inanimate objects such as cars?