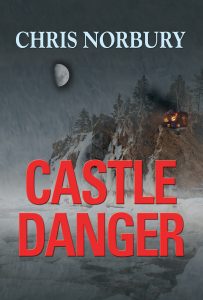 In a year when the Chicago Cubs FINALLY won the World Series and Donald Trump won the Presidency, perhaps the next least likely thing to happen is the publishing of Castle Danger. That accomplishment is perhaps one of the greater achievements in my life. Woo hoo! (pardon the small indulgence). The reason it was highly unlikely is that until about two years ago, I never thought I had a reasonable chance to write a book that was worth someone paying money for to read.

For those of you who have published a book of any sort, you know that it’s a tremendously hard endeavor. For those who have not written a book and seen it get into print—you’ll have to trust me. It is DAMN hard. The actual time spent is astronomical—hundreds of hours just to write a 100,000-word first draft, and at least that much time to revise to the point of no return.

The mental abilities needed to write a well-paced, coherent story with interesting characters who elicit some emotions from the reader is a brain exercise, unlike any puzzles or brainteasers to which one can subject oneself. Just keeping the continuity straight is a major challenge. Then there’s the unanticipated phenomenon of constantly thinking about characters, storylines, plot twists, and revision ideas that occupy one’s brain almost constantly during the day when your mind is not otherwise engaged.

So, publishing Castle Danger is easily the biggest thing that happened to me this year.

The overall response from those who read Castle Danger has been rewarding beyond words. I set out to write a book that wouldn’t bore readers and would make them feel that the money they plunked down to buy was well-spent entertainment dollars. I seem to have achieved that goal. All reviews gave the book 4-star or 5-star ratings and made some very positive comments as well.Selling copies of the book to willing buyers was merely icing on the cake.

A second goal I met this year was winning my Goodreads.com Reading Challenge. This is the fourth year I’ve participated. I’ve both exceeded each year’s reading goal and increased the number of books I’ve read each year. This year my goal was to read 66 books. I have read 80 to date. I’ll likely finish another book or two by the end of the year. Even though I blew my target out of the water, I’ll only increase my goal by ten percent for 2017, with a new target of 73 books read. This year was exceptional for reading because my wife and I made a large number of long road trips. Those daylong drives gave us dozens of hours to listen to audio books.

The third accomplishment in 2016 was the successful launch of my website, https://chrisnorbury.com. I have above average intelligence and enjoy mental challenges, but technology and I do not get along very well. I seem to learn just enough to get myself into trouble with my computers or iPhone or printer or software programs. But after much trial and error, stops and starts, and a few communications with customer service, I joined the ranks of website owners as opposed to bloggers who merely use a free hosting service such as WordPress.com.

By the way, my first post of 2017 will be my annual selection of my favorite book of 2016. I’ve done an annual favorite book post for several years and highly recommend all the winners as well as all my finalists and honorable mentions.

I wish you all a Happy, Healthy, and Prosperous New Year (however you define prosperous).

What were your significant accomplishments in 2016? What do you have planned for 2017?