I was invited to display my books and talk for a few minutes about Castle Danger as part of a Castle Danger Brewery beer-tasting dinner at the Owatonna Country Club for their Oktoberfest celebration on October 27, 2017. The food and beers were outstanding, and the event was well-planned and executed.

My connection with Castle Danger Brewery is entirely coincidental since I had chosen the title “Castle Danger” long before I knew the brewery existed. Funny that we both started about the same time. The brewery began making beer in 2011. I began the first draft of Castle Danger in 2012.

Castle Danger Brewery was founded in the unincorporated town of Castle Danger, MN. They’ve since moved to a beautiful tasting room/brewery in nearby Two Harbors, MN and are gradually expanding distribution throughout the state and region.

I first passed by the town of Castle Danger more than 50 years ago and was immediately enamored with the name, especially since there is no “real” town there–just a road sign on Highway 61 and a cluster of houses between the highway and Lake Superior. Anyone who drives to Gooseberry Falls State Park or farther will pass by Castle Danger. I’ve made that trip dozens of times in my life and still get sentimental about the times in my childhood when my family camped up on the North Shore or Dad and I went on canoe trips in the Boundary Waters Canoe Area Wilderness.

So I shared my “Castle Danger” story, learned more about five excellent Castle Danger beers, and was hosted at the dinner table by Castle Danger Brewery representative Brian Betz and his lovely wife, Kristen. And oh, by the way, I even sold a few books at the event. Even better, I received several generous, unsolicited donations to Big Brothers Big Sisters of Southern MN! Thank you for your generosity, OCC members and guests!

IT’S OFFICIAL–GOT THE DIGITAL SEAL FOR MY WRITER’S DIGEST AWARD! 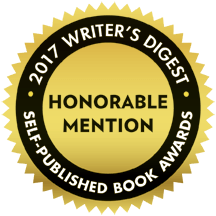 I never expected to win any awards for Castle Danger,  but the competitor in me decided I should enter at least a few contests to get an idea of the quality of my book vs. other self-published books. Many contests will provide the author with critiques, win or lose, which I find useful for improving my writing. But to win any award is gratifying and at least a small acknowledgment that thousands of hours of work were worthy of an “Atta boy!”

Writer’s Digest is one of the leading magazines for writers and authors and has been published since 1920. The Self-published Book Awards have been given annually for twenty-five years. More than 2,400 books were entered in all the categories, so even winning an Honorable Mention puts Castle Danger in elite company.