THE THIRD BOOK IN THE MATT LANIER MYSTERY-THRILLER SERIES IS HERE.

Dangerous Straits finds Matt in the toughest situation of his life after he reluctantly leaves Castle Danger with the dying hope of stopping the Millennium Four conspiracy and clearing his name of murder charges. 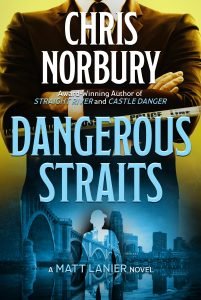 Once a world-class musician, Matt Lanier now survives by playing guitar for spare change in the streets and skyways of Minneapolis. He’s also homeless, broke, and a fugitive accused of murdering a cop. His downward spiral started after he uncovered a multi-billion-dollar conspiracy orchestrated by Leland Smythe, a corrupt, ruthless real-estate magnate.

To clear his name and reclaim his normal lifestyle, Matt must convince the authorities that the conspiracy is real. Because Matt threatens Smythe’s success, Smythe wants him dead.

David had better odds against Goliath.

Physically and emotionally scarred after surviving multiple murder attempts, Matt decides to end his year-long losing battle against Smythe and start fresh with a fake identity. He’ll do anything to obtain it, even commit a crime. But when an unlikely ally arrives at a pivotal moment, Matt is forced to make a fateful decision. Either live a lie for the rest of his life or go up against Smythe one final time.

If you enjoyed Straight River and Castle Danger, BUY Dangerous Straits to see if Matt can rise from the depths of despair and find a way to escape his personal hell.

Click on the Indiebound.org banner below and order from your local bookstore.

Dangerous Straits is also available at BookLocker.com and at many online booksellers, including my WEBSITE STORE  and Amazon.com.  Click HERE for other options.

Chris donates ONE DOLLAR ($1.00) per book sale to Big Brothers Big Sisters of Southern MN. Thanks for supporting an outstanding mentoring organization.