I get easily sidetracked watching the Olympic Games. To me, live sporting events are the original and best form of reality TV. The Masters Golf Tournament is the best of sports reality TV, but I’m a golfer, so I’m biased. The Olympics used to be a solid second, but are fading as I get older, the events get newer, and the drama gets more contrived.

In sports that we pay money to watch in person or on television, there are real stakes, real bragging rights, real money, and real emotions involved… which makes the drama exciting and real …

… except when the sport is shown on a tape-delayed basis.

This is the case with the Sochi games. If we watch what NBC packages for us during U.S. prime time, we view carefully edited content designed to heighten the drama to the max and entice us to sit through interminable commercials to find out if our favorite athlete or country came through in the clutch.

A popular way to manipulate viewers’ emotions is when the network producers haul human interest stories from the reserve vaults if an athlete is contending in an event.  They give us extra reasons to root for the poor kid whose dad died when she was ten, mom worked four jobs to pay for her training, and grandpa gave her her first pair of skis so junior is competing as a tribute to “Boppa.”

The worst example of this Olympics is the Canadian mogul skier whose brother has Cerebral Palsy. Their story was played up at the 2010 Vancouver Olympics and was repeated in Sochi, a little too heavy-handed, in my opinion. It certainly is a touching story, but NBC went overboard in showing the brother’s reactions to the skier’s gold medal victory and repeating way too many times what an inspiration the handicapped brother is to the athlete. We get it, NBC. Please don’t beat us over the head with the story.

Conversely if a favorite fails to win the gold, or win any medal, that same drama of the struggling career is played up as reasons why the competitor failed. Too heartbroken, too injured, too much pressure from the media–and maybe the fans, but I know very few fans who blame an individual athlete for not winning every single time they compete. Or the network might fuel rampant speculation about some potential scandalous reason why the athlete wasn’t in top form.

But sports is unpredictable and damn hard, TV Czars! Give the competitors a break. There might be a logical, non-scandalous reason why the winner won and the loser lost.

Downhill skiers sometimes lose the gold by a few hundredths of a second because they hit a rut in the snow that caused them to slip sideways three more feet than they expected. 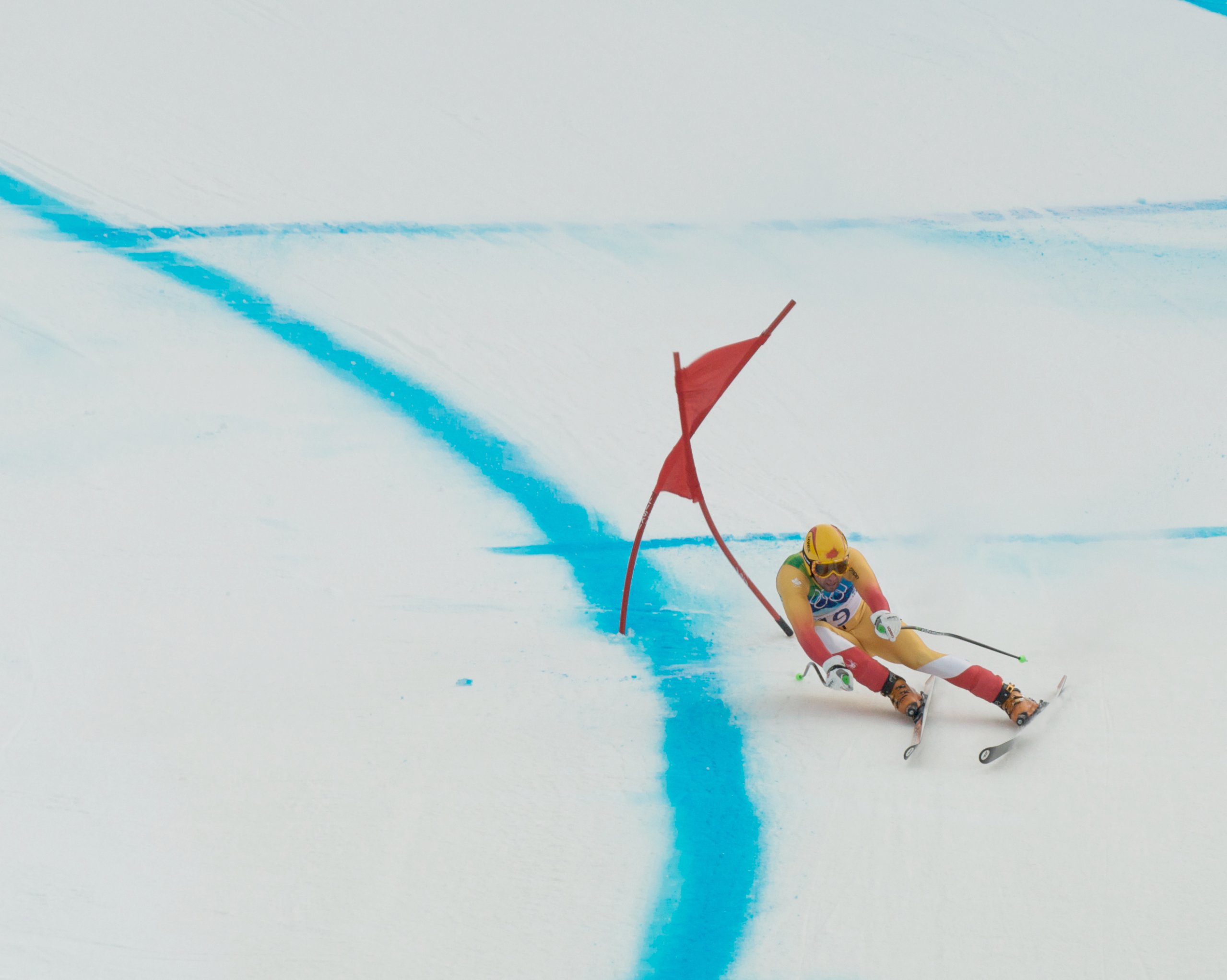 Hockey teams sometimes lose when the winning goal is scored because the puck changed directions three times after the shot and the goaltender never saw it coming.

Figure skaters sometimes lose the gold medal because one judge has some personal grudge against them, their country, the music they skated to, or the way they look.

(This photo is in the public domain)

Then there’s the interviews at either the moment of triumph or moment of defeat. The worst of those has been the Bode Miller interview after he won the Bronze Medal in a downhill skiing event. His brother died recently and the interviewer, Christin Cooper, pressed him relentlessly about his brother until Miller broke down completely and was unable to continue the interview. Cooper was merely doing her job (as defined by her bosses), and Miller didn’t fault her after the fact, but I was one of those who was thinking “Leave the poor guy alone right now! Let him enjoy his triumph. Don’t reduce him to a blubbering pile of tears just so you can ‘capture the moment.'” Asking him that delicate question would have been much more effective later, in studio, when he’s had time to decompress after the competition.

Athletes know they’re being used in these ways and seem willing to accept the intrusions and hype. Of course, the TV networks are going to encourage any sort of outrageous, emotional, or celebratory behavior, because it seems we love to watch other people lose control or step over the imaginary lines of decorum and/or good taste.

I’ve heard that most reality TV shows are highly scripted in terms of controlling the action, the emotions, dwelling on conflicts or problems, blowing them out of proportion so viewers will tune in next week to see if so-and-so beats the crap out of her BFF for cheating with so-and-so’s boyfriend.  It apparently works for most reality shows and makes sense for networks and athletes as well. They are in their respective businesses to make money,  so we can’t complain when they try to maximize profits. It’s the American Way … like it or not.

This Neo Renaissance Writer finds this relevant because we are all a product of our culture and environment and should strive to educate ourselves in what’s real, what seems to be real, what tries and fails to be real. Then we can decide if we prefer fake emotion that seems real to real emotion that arises from the heat of battle and competition.

What do you think? Has sports gone over to the dark side and become manufactured reality TV?

Scroll Up
Manage Cookie Consent
To provide the best experiences, we use technologies like cookies to store and/or access device information. Consenting to these technologies will allow us to process data such as browsing behavior or unique IDs on this site. Not consenting or withdrawing consent, may adversely affect certain features and functions.
Manage options Manage services Manage vendors Read more about these purposes
View preferences
{title} {title} {title}
%d bloggers like this: